The gala returns to toast the biggest winners on two wheels from the last two seasons : MiX Magazine Thailand 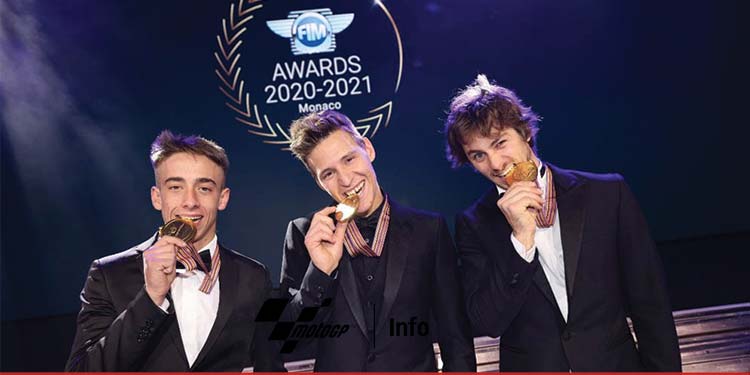 The FIM Gala returned for a very special edition in 2021, with Champions from both 2020 and 2021 attending the event after the Covid-19 pandemic obliged the cancellation of the 2020 edition. Gathering together Champions from all disciplines on two wheels, the Gala took centre stage in the Principality of Monaco on Saturday night.

2021 FIM MotoGP™ World Champion Fabio Quartararo (Monster Energy Yamaha MotoGP) and 2020 Champion Joan Mir (Team Suzuki Ecstar) were two key headliners at the event as they received their medals, celebrating the last two years of incredible MotoGP™ action and a first premier class title for each of them.

Amongst the many others present were WorldSBK sensation Toprak Razgatlıoğlu, who took a stunning first WorldSBK crown in 2021, as well as 2020 and 2021 FIM Moto3™ Junior World Champions Daniel Holgado and Izan Guevara. Holgado receives his medal ahead of his full-time debut in Moto3™ on the world stage next season, where Guevara has already impressed to become a Grand Prix winner this year.

That's a wrap on the final event of the season for those toasted on stage, with winter break now truly underway as we wait for the roaring engines to return at Sepang International Circuit for the Shakedown Test. There, Gardner will be the first back out as he takes part as a MotoGP™ rookie, before a few days later the likes of Quartararo, Mir and Bastianini suit up to begin their campaigns. Acosta, Arenas, Holgado and Guevara won't be far behind them either as they get ready for more... so who will return to the Gala stage in 2022? Join us for another spectacular season to find out!